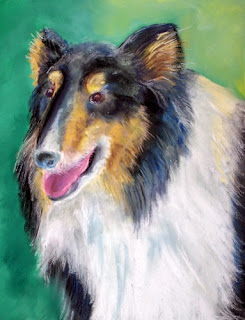 I just added a new member to my household this past weekend, a rescue collie I drove down to Virginia to get. I grew up with collies and was always a collie owner for many years. My last collie died in 1991, and I have had two shelties and a mixed breed since then - but decided I needed a new collie in my life to keep me and Willow (my remaining sheltie) company. So we began investigating collie rescue a few months ago.
And I ended up getting a guy from Virginia after the NJ rescue folks referred me there, as they had no suitable dogs available. His name there was 'Ben' which is a nice strong name, but just did not totally appeal to me, so I have renamed him 'Bran'. I've always liked names that have Scottish/Celtic/Arthurian connections - and Bran fits the bill without changing his name too drastically.
Bran means "raven" - a good name for a black dog. Bran was one of the dogs of legedary Irish hero Finn MacCool. Bran the Blessed was also a legendary hero of Welsh/Irish/early British tales, and part of the Arthurian legends too. Bran is also a character in Susan Cooper's wonderful "The Dark is Rising" series.
Though of course all I seem to get from people are quizzical looks, and jokes about bran muffins, bran flakes and oat bran! But I like the name, and I did this portrait of Bran, based on his photo from the Petfinder page, on this past Saturday, the day before I went down to adopt him.
Posted by Debbie Cusick at 11:53 AM 1 comment:
Email ThisBlogThis!Share to TwitterShare to FacebookShare to Pinterest
Labels: animal portrait 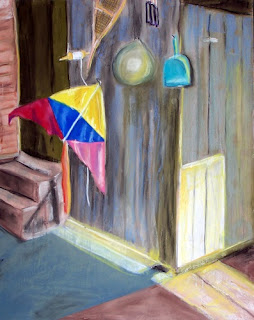 This is the last of my farm series from this summer, though I do have a few photos I may use to add to the series as I go. I had fun with the shed, and the wonderful lighting, and the history of all the old and odd things hung up on the walls from summers past.

Posted by Debbie Cusick at 7:36 PM No comments:
Email ThisBlogThis!Share to TwitterShare to FacebookShare to Pinterest
Labels: Atlantic Canada

The Farm - Front Porch in the Afternoon 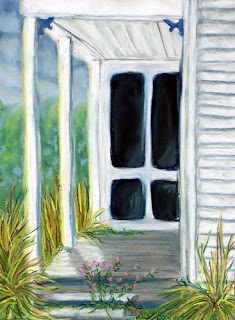 Here is the fourth in my series of farm paintings from this summer. We had lovely weather just about the entire week, so lots of great light and shadows for trying to paint plein air. I loved the light and shadows on the porch here but, sadly, the mosquitoes were terribly fierce! I'm not sure I managed more than about 30 minutes on this one, and then I had to get inside because the itchies were just too bad. 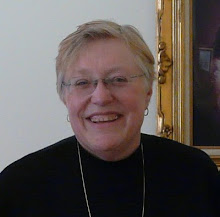 Debbie is a Signature Member of the Pastel Society of New Jersey, and served as their 2nd Vice President and Exhibitions Chair. In 2011 Debbie moved to northeast Florida where she is Recording Secretary of the Art Guild of Orange Park, a member of the Jacksonville Artists Guild, and also currently serves as the Secretary and Webmaster of the First Coast Pastel Society , as well as Secretary of the St. Johns Audubon chapter.

Debbie is also a member of the Riverside Presbyterian Church in Jacksonville where she sings alto in the church Chancel Choir.

Her work can be seen at the Starving Artist Gallery in St. Augustine, FL.