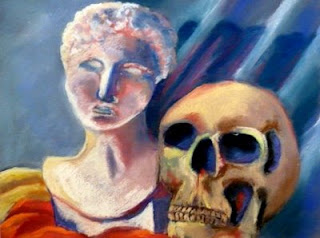 Tonight was the last night of winter art class. Christina didn't bother bringing in anything for a still life but figured she would just grab things sitting around the classroom. Her first grab was the same small bust that she had me work on as a second painting last week, but then she chose to add something to it that would probably not have been my own choice. I didn't think a skull was something terribly appealing. Yet it actually turned out to be rather fun to do, and it was interesting to see how many colors could be found in two essentially monochrome objects. In the end I actually enjoyed this one.
Posted by Debbie Cusick at 10:22 PM No comments:
Email ThisBlogThis!Share to TwitterShare to FacebookShare to Pinterest
Labels: Still life 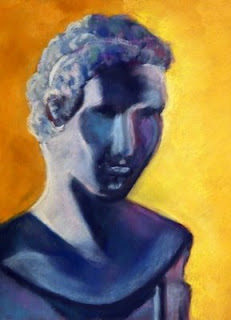 Last night in class the Vase and Shadows painting was another one of those that just went very quickly. I was done with it by 8:30 PM, and still had an hour left of class. Christina challenged me to try a painting of this small bust which happened to be sitting in the classroom. I was not thrilled with the idea as it just served to remind me of why I don't enjoy drawing people, or have no interest in portraiture.
But she placed it up on the cabinet where the vase of flowers was sitting, so that the spotlight hit it with interesting lights and shadows, and that made it more appealing. So I spent the last 45 minutes of class working in this. At least he didn't need a break every 20 minutes to get up and stretch, and can't complain that I made him a bit wonky looking. :-)
Posted by Debbie Cusick at 8:20 AM 1 comment:
Email ThisBlogThis!Share to TwitterShare to FacebookShare to Pinterest
Labels: Still life 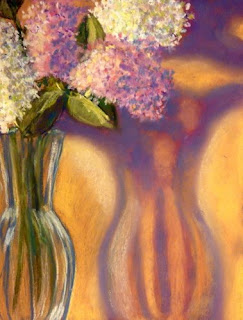 Spring certainly felt like it was coming today. But just because it was mild and sunny it does not mean things are blooming, mostly just starting to bud. Therefore no real flowers available from Christina's garden, but she brought in very nice silk ones for us to try to paint. They certainly gave a great illusion of spring. :-)
But it this case it was the wonderful cast shadow of the vase that really caught my eye, even more than the flowers themselves, so I just had to made the shadow the star of the show in this painting.
Posted by Debbie Cusick at 10:34 PM 1 comment:
Email ThisBlogThis!Share to TwitterShare to FacebookShare to Pinterest
Labels: Still life 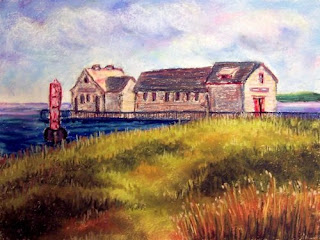 I can't seem to get away from Atlantic Canada, can I? Pretty soon I'll have an entire book's worth of paintings from Atlantic Canada. Tonight in class Christina proposed to talk about perspective, at the request of one of the other students. I sort of listened in with half an ear though most of it was not new to me. But I always enjoy Christina's lectures.
However I painted as I listened! This is a picture I've long been wanting to paint, one I took of Ruthie's Lobster House in the darling little town of Victoria-by-the-Sea on Canada's Prince Edward Island. I kept putting it off and putting it off though, as I hated fiddling with drawing and painting buildings. But in honor of the class on perspective I decided to just bite the bullet and go for it.
I took so long on the building I barely got done by the time class ended! However I did manage to finish, so spent about 2 hours on this painting, a long time for me. :-) This is done on my new paper of choice, 9x12 Art Spectrum Colourfix.
Posted by Debbie Cusick at 10:45 PM No comments:
Email ThisBlogThis!Share to TwitterShare to FacebookShare to Pinterest
Labels: Atlantic Canada 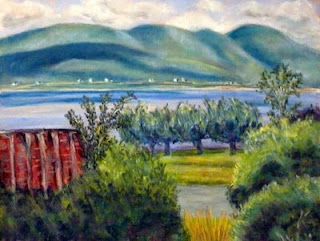 Tonight was a slow night for my pifflechat group, with one friend out celebrating Purim, and another running errands, soI decided to paint a picture. I choose this fromt a photo I took during my trip to Quebec's Gaspe Peninsula in 2oo5, I stopped alongside the road in New Brunswick, as I neared the border I pulled over and took a photo of the Bay of Chaleur, looking across to the Gaspe on the far side. I thought it was an awesome view.
Although I don't think this is an awesome painting, LOL. I could not find my Art Spectrum paper, and did this on a sheet of 12x16 orange Canson, all I could find. Gee, I used to love Canson, but after using Art Spectrum most of the time lately the Canson seemed horrible, and I had to really fight with it. I also found I was sadly lacking in greens in the little set of pastels I had here in the house (most of my pastels are already in the car to go to art class tomorrow).
But just doing something, anything, is good - no matter the result. Because I hated the orange paper I had, and had no idea how it would turn out, I took a few photos along the way - so I'll show you some of the stages this picture went through before I called it quits.
1) A very simple and basic drawing, and just filling in some underlayer colors using the Pan Pasels. 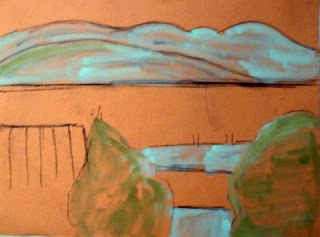 2) A very simple Pan Pastel undercoat on the entire painting. 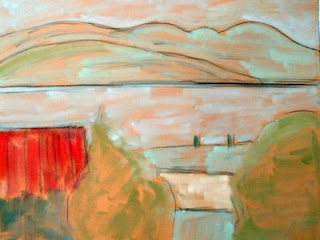 3) Worked on the sky, clouds, and the distance hills of the Gaspe. Some deeper color to the water. 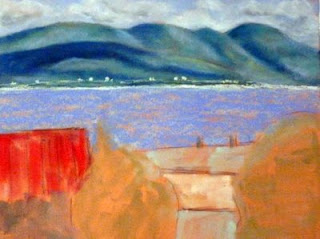 4) More work on the water, the building roof, and some of the vegetation. 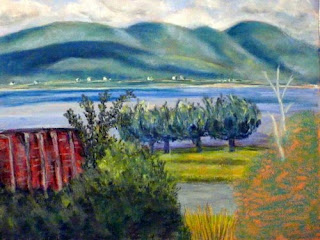 So there you go. I have more photos of the stages this went through, but this is enough to give you an idea .I don't know if it's truly "done" but it's done for the night at least.  A shame in some ways - I do *love* this size so much more than the smaller 9x12 Art Spectrum. But I don't like using the larger sheets of Art Spectrum as I have so much wastage. And I've never had much luck using the Art Spectrum ground that you can apply to a surface of your own - it never comes out like the "real thing".
Maybe I just need to start working on Canson more again until I get used to it. I don't like the orange color either - but it was all that was left in the multi-color Canson pad - naturally since I left the icky color until last. :-)
Posted by Debbie Cusick at 9:06 PM No comments:
Email ThisBlogThis!Share to TwitterShare to FacebookShare to Pinterest
Labels: Atlantic Canada 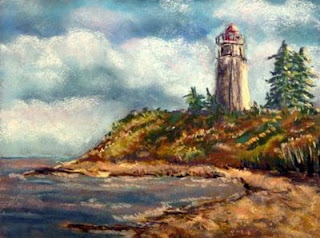 Well, it looks like it's back to Atlantic Canada again for me! This is just a "quickie" done in class last night from a photo of mine. Cape Jourimain is in New Brunswick, Canada, just at the approach to the bridge to Prince Edward Island. It's a nature sanctuary and a major birding hotspot, and also boasts a restaurant that serves wonderful food - mostly all locally produced and organic, and supports its entire visitor's center with "green" technologies.
The lighthouse there is no longer operational, and in past years ospreys have nested atop it. I have seen at least a couple of my "life birds" at Cape Jourimain.
I finished my onion painting quickly last night. Christina was doing some demos after that, but I have taken her classes before and seen the same demos, so I took advantage of the last 50-60 minutes I had available to work on a quick additional picture, which is this one here - also a 9x12 on Art Spectrum Colourfix.
Posted by Debbie Cusick at 1:14 PM 2 comments:
Email ThisBlogThis!Share to TwitterShare to FacebookShare to Pinterest
Labels: Atlantic Canada, lighthouse 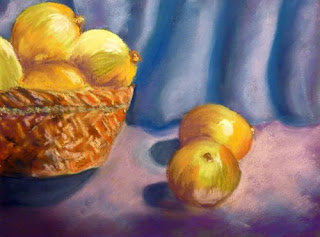 It was back to still lifes tonight with a basket of onions. Not too much to say about this one, except that I liked the contrasts of the complementary colors of the onions and basket, and the mostly purples of the background. This one went pretty quickly, about 75 minutes total. Done on a 9x12 sheet of Art Spectrum Colourfix paper.
Posted by Debbie Cusick at 10:05 PM No comments:
Email ThisBlogThis!Share to TwitterShare to FacebookShare to Pinterest
Labels: Still life
Newer Posts Older Posts Home
Subscribe to: Posts (Atom)