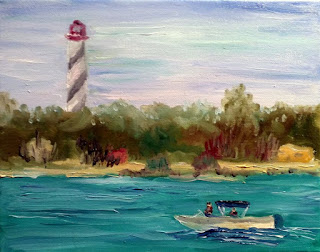 Today was experiment day. I've been loving my acrylics, but have heard a lot about the newer water-based oil paints as well. I was curious about them, and when I was at Michael's yesterday they had a small introductory set for 40% the regular $24.99, so I decided to splurge! Only six paint tubes and not necessarily the colors I would have chosen. If you are going to provide only six paints do you really need both a yellow and a yellow ocher!

I would have chosen a slightly warmer blue and green as well, and maybe a Payne's gray rather than the yellow ocher. Of course I could have bought the colors individually to get exactly what I wanted, but that would have cost about $40 rather than $14. :-)

And this is just an experiment. I tried them today and created the above, 8x10 on canvas. Definitely just a quickie and tomorrow I may make changes, but an interesting experiment.

Posted by Debbie Cusick at 8:39 PM No comments:
Email ThisBlogThis!Share to TwitterShare to FacebookShare to Pinterest
Labels: Florida, oils, seascape 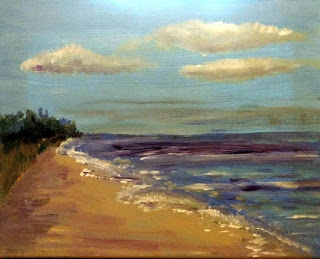 Last night I spent the evening painting a violin top for an Art Guild project. I finally got as far as I could go but still had some wet paints on my palette. I also had a small 8x10 canvas with me, so I got it out to just paint on it to use up some paint.

So the painting above is what I wound up with. Just a quick 20-minute effort using what I had on my palette. Not anything special, but I love beachy scenes.
Posted by Debbie Cusick at 7:41 PM No comments:
Email ThisBlogThis!Share to TwitterShare to FacebookShare to Pinterest
Labels: acrylic, seascape 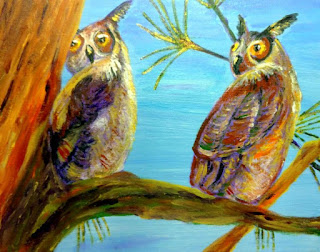 Thanks again to my friend Leslie for inviting me to her studio, forcing me to try to paint! This is the image from last night, another 8x10 acrylic. I started these owls two weeks ago on an 11x14, and they were so awful I just painted over them and did the painting just before this one instead.

The reference is from a photo I look at Fort Mose in 2015. I had heard through the birding grapevine that a pair of great horned owls had been spotted there. When I got to the park I could hear them hooting, but while I looked high and low I could not see them anywhere. What I did see was a man with binoculars and a camera with a giant foot-long lens hunting around also.

He was looking for the owls too! Since everyone spots birds better than I do I asked if I could tag along. Sure enough, he was the one who finally spotted the owls. :)

My lucky day I guess as he said he'd been coming every day for over a month looking for the owls, and this was the first day he'd seen them. I've been wanting to paint them ever since but only now got around to it. 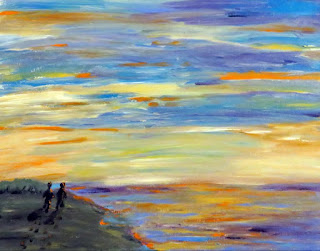 Wednesday I went to my friend Leslie's studio again, which is always fun, and makes me get out and do some sort of artwork even if I'm not feeling overly inspired. I started on a different painting which I hated more and more as I went on, so I finally took the colors on my palette and just wiped them back and forth all over the canvas. As I did it seemed a scene began to appear so I just pushed to emphasize it a little further. And that's how I wound up with this painting - not great art but something that felt very theraputic to work on. Acrylic, and slightly larger than I have been working lately, at 11x14.