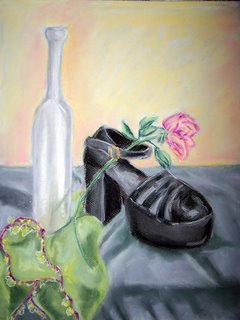 In my Tuesday night art class we usually do life drawing from nude and clothed models, but two weeks ago our model never showed up. We waited around for a while, but eventually realized she was a "no show", so the instuctor told us we could investigate the storage cupboard in the room, and set up our own individual still lifes.

I started out quite tamely with a traditional bowl filled with (fake) fruit, but decided it was boring so put it all away and started from scratch again. Unfortunately most stuff in the cupboard was pretty boring, but I finally would up with the objects I have here.
Once a month the art museum has Tango Night, and so many tangoers show up that it's hard to find a parking place to get in for my lesson! At any rate these objects I chose make me think of the tangoers, so that's where the painting's title came from.
Posted by Debbie Cusick at 9:05 AM
Email ThisBlogThis!Share to TwitterShare to FacebookShare to Pinterest
Labels: Still life