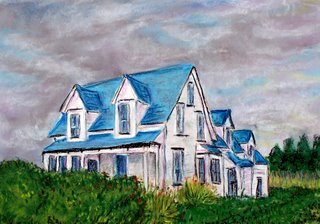 This is the third in my Canadian series, and is the actual farmhouse itself! My son had asked me to paint a picture of the farm, and he wanted it from a particular angle which always said "arriving at the farm" to him. I sure hope I got the right angle. :-)

Of course the problem with that angle is that it's a perspective nightmare, with all those varying roofs and dormers! So I was dragging my heels on it, until my daughter-in-law told me I should just go ahead and do it. Well the day I chose was not a classic "farmy" day with bright blue skies and puffy white clouds, but a stormy-looking day with ominous gray clouds scudding across the horizon. However I found I was fascinated by those clouds and felt it made a more interesting picture than that puffy white ones would have made. After all, good stormy days are classic 'farmy" days too.

But it was cool out, and windy, and thundery, and the rain threatened, so I tried to work fast to capture what I could while the rain held. Luckily I was *almost* done when raindrops began appearing. I had to grab the painting and race inside with it, and then come back for my easel and supplies. But most of what I wanted was there, and I was able to put some final touches on it the next day in my "studio" (the back shed of the farmhouse).
Posted by Debbie Cusick at 11:23 AM
Email ThisBlogThis!Share to TwitterShare to FacebookShare to Pinterest
Labels: Atlantic Canada