Afternoon at the small barn 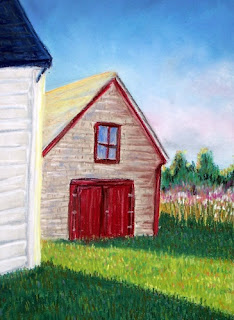 I'm just back from my annual Canadian vacation to my family's farm in New Brunswick, Canada. Last year I started a series of pastels done at the farm. It was such fun that I decided I had to continue again this year. Even though the trip was shorter than usual this year I managed to get some pastels done.

All were done from life, and done pretty quickly. That *does* lead to some wonky angles and ellipses. That's one disadvantage of working from life (at least for those like me, whose drawing skills always need work), and you also want to capture the beautiful light of a certain scene, but if you take too long the light shifts so much. So maybe 40 minutes max spent on any of these four, but I'll post them one-by-one in the order I did them.

Those that were done outdoors (two of the four) also had the disadvantage of much mosquito presence so were even more quickly done than the two interior scenes! But this was my first attempt, trying to capture a bit of our small barn behind the back edge of the farmhouse. I loved the long shadows of the afternoon sun.
Posted by Debbie Cusick at 12:27 PM
Email ThisBlogThis!Share to TwitterShare to FacebookShare to Pinterest
Labels: Atlantic Canada