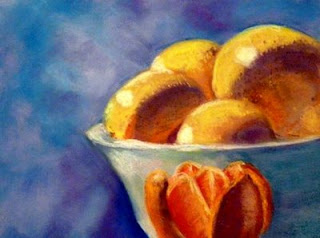 Yay. I've been waiting for this day! Art class has finally started again, and tonight was the first class with Christina. Life has been so hectic lately, and no time for pastels at all. I have not touched them since the last class ended early in December. Boy, talk about feeling out of practice. Luckily Christina had a fairly simple still life set up for the class to work on. Since it was a new class, and some new students, she wanted something simple for people to try as she had no idea what level they were at in their art.
Good for me as I was not up for anything complicated. Simplify, simplify, simplify! I made it even more simple than her setup. And even this was a struggle. I hated it for most of the evening, and felt like a kindergarten kid again - but by the end of the session was starting to feel back in the groove again. I need to work more and not stay so out of touch.
I also gave Christina a painting for a show that will be at the Whippany Library in February. Opening reception is Feb. 9. That will be fun. I chose "Applegate Farm" to go in the show.
Posted by Debbie Cusick at 10:18 PM
Email ThisBlogThis!Share to TwitterShare to FacebookShare to Pinterest
Labels: Still life