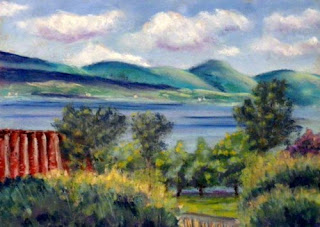 It was in 2005 that I visited with friends in Quebec's Gaspe Peninsula. I drove up from our farm in New Brunswick, a long 400-mile journey. I was getting tired as I approached Campbellton, and yet still had a long way to go, but pulled over to the side of the road to catch a glimpse of the Bay of Chaleur, which separates New Brunswick from the Gaspe. The vista was so stunning I had to take several pictures.
Ever since I've wanted to paint a picture of that scene. I made my first attempt at it, using my photos as reference, with this rendition back in March.
And I just was not happy with it. It didn't capture the scene the way I wanted to.  I rarely paint a scene over again, but I so *wanted* this one to be wonderful,  and I just didn't like it. So last night I decided to try again, on a sheet of 9x12 Art Spectrum,  and if it "felt" better from the Canson of the first version.
But,
Posted by Debbie Cusick at 7:27 PM
Email ThisBlogThis!Share to TwitterShare to FacebookShare to Pinterest
Labels: Atlantic Canada