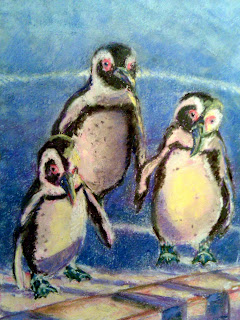 We were talking in art class last week about art shows with "themes". A couple women had been doing bird paintings, and we talked about maybe do a show that was all bird paintings. And someone said that the Turtle Back Zoo had an art gallery, and maybe we could have a show there. We all smiled at the idea and said we would have to paint pictures of birds and/or animals.
That got me thinking, and I realized I have have a lot of photos actually taken at the Turtle Back Zoo itself, and maybe some would make some nice reference photos. This is one I took a few years ago of the penguins at the zoo. Who doesn't love a penguin? LOL. The penguins at the zoo are African Penguins. I always get a chuckle out of that as if one conjures up a mental image of "African Wildlife" it is not generally penguins that come to mind. :-)
I call this Penguins in Progress and I don't think I'm actually done with it yet. I'm still not satisfied with the background, and not sure I'm fully satisfied with the penguins themselves. But this is the point I reached last night so decided to post it anyway - and will see where I go from here.
Posted by Debbie Cusick at 7:53 AM
Email ThisBlogThis!Share to TwitterShare to FacebookShare to Pinterest
Labels: birds