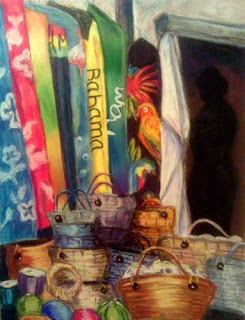 This is another picture from my Bahamas series, from my trip there in March. The Straw Market is a large open-air tented market in downtown Nassau, and arguably one of the major tourist attractions in Nassau. Apparently it started in order to sell, as its name implies, items crafted from straw. However it now seems to sell everything under the sun, and I found it a very uncomfortable experience to actual wander through the straw market. You are bombarded on all sides by vendors trying to sell you things - and I couldn't get out of there fast enough!
But in appearance it's a unique and colorful experience. I only took one photo of the market, right at the entry to it. Once inside the incessant sales pitches, and the urge to keep moving, kept me from getting any other shots. I thought the one I did manage to capture had a lot of color. I've been staring at it for months, longing to try to paint the scene, yet positive I didn't have the ability to carry it off.
But tonight I finally found myself brave enough to give it a try. I was sure it was going to be an exercise in frustration however, and one destined for some hair-pulling before winding up in the round bin. But as I got into it I had a lot more fun than I expected, and it actually ended up turning out far better than I expected also, so I've decided it's a keeper after all, much to my own surprise! :-)
Posted by Debbie Cusick at 10:16 PM
Email ThisBlogThis!Share to TwitterShare to FacebookShare to Pinterest
Labels: Bahamas

Debbie, I love this! I haven't been to the straw market in many years, but you've captured it beautifully.