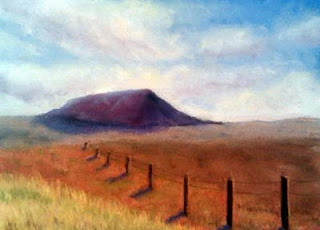 Last night was my first week back at art class after being up in Canada on vacation for a few weeks. I admit my heart was not in it. My dog Bran died during the night last night. He was not quite seven years old, not an old dog, but he had been battling nasal cancer for the last 14 months, and was slowly losing the battle. I knew I was having to face hard decisions about him in the near future, but sweet Bran took the decision out of my hands.
But I was glad for art class last night as a distraction and a chance to see my friends there again. But I didn't feel totally up to painting either, so wanted to find something not too fussy or detailed to work on. In the end I came across this 40-year-old snapshot that I happened to have with me, taken on a camping trip across the American southwest with my family, when I was a teenager. It was old and sort of faded, Kodak Instamatic snapshot - but it had what I was looking for - simplicity.
So I began fooling around with it just to have something to do with my hands. I hated it initally, looking something like a 5-year-old's crayon coloring. Last I upped my estimate to maybe something a 10-year-old would have done. By the end of the evening I was actually not unhappy with it, and enjoyed the stark simplicity. It suited my mood for last night, and so totally different from the eastern landscapes I normally do.
So I was glad to get back to class. When I get more organized maybe I'll share some of the paintings I did up in Canada. In the meantime I'll close with a portrait I did of Bran in 2007, before he got ill, and so terribly disfigured from his disease. 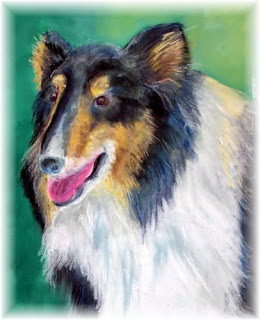 Posted by Debbie Cusick at 8:31 AM
Email ThisBlogThis!Share to TwitterShare to FacebookShare to Pinterest
Labels: Southwest