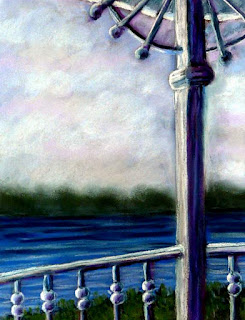 I had such fun at my pastel plein air outing yesterday. But as the morning wore on it began to cloud up, and as noontime approached there were even a few drops of rain being felt. Not very good for painting! But there was a nice large gazebo in the middle of the park so we all gathered up our pastels and chairs and easels and boards and lunches, and came into the gazebo to eat then continue painting.

I had done pretty much all I thought I might with my first painting, so I decided to start a second one, and trying to incorporate the gazebo itself seemed like a fun idea. Though the light was so dark in the gazebo that it was hard to see what I was actually doing. And it's hard to attempt architectural details when you have no rulers or straight-edges and it's all done freehand. But it was still fun to try, and fun to be with a bunch of other artists.

This one, just like yesterday's, was done on my usual 9x12 art spectrum, various pastels.
Posted by Debbie Cusick at 8:39 AM
Email ThisBlogThis!Share to TwitterShare to FacebookShare to Pinterest
Labels: Florida