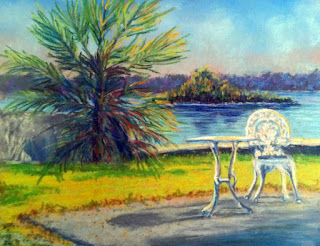 This is the third painting I did for the Club Continental show this afternoon. There were 60 paintings in the show, of which about 10 were chosen to remain on display at the club for about a month - none of them being mine, LOL.

This was done on an 11x14 sheet of Richeson paper, the first time I had ever tried that surface. It's a sanded surface but a bit rougher in texture than I prefer. But since I bought a pad of it I'm sure I'll try it out again. :-)

The show itself was a lot of fun and we had a good turnout of folks from the Art Guild, both show participants and others who just showed up to enjoy the show. The Club is beautiful and the appetizers were yummy.
Posted by Debbie Cusick at 7:27 PM
Email ThisBlogThis!Share to TwitterShare to FacebookShare to Pinterest
Labels: Florida

Hey, Debbie! It's Lee Sampson from Nashville, TN. Remember me from the old alt.diet days? Now and again, I think of you; and about a week ago, you popped into my head. I searched your name and found the article on CarbSmart by Amy Dungan. It looks like all that hard, hard work over the last 10, 15+ years has finally paid off. I am so happy for you. I, too, am back in the swing of things. I've lost 60 pounds since September of 2012 and am halfway to my dream size. Many blessings, and I'm glad to see your artistic skills have blossomed in the process!! Lee m o l l y t i n k e r s @ g m a i l . com.