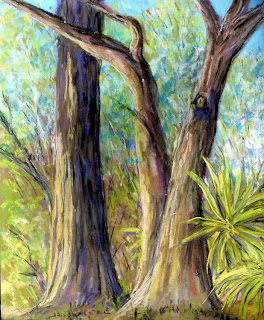 The first weekend in February we had our FCPS paint-out day at the Jacksonville Arboretum. This was February after all, and the temperatures were in the 30s when we first arrived there early in the morning, and people had on their hats and coats and gloves, and even long johns! But it's Florida as well and by late morning it had warmed up to the low 60s and was a glorious day for painting out of doors.

I had never been to the arboretum before, but it's certainly a true gem in the area. Most of us set up our easels at spots along the walking trail that surrounds the small central lake. Normally I'm drawn to water as a subject, despite my inadequacies with painting it!

But I was on a tight time schedule on this day. As soon as the paint-out ended I was heading up to Hilton Head to spend a few days visiting with friends. And I struggle so with water. So I decided on a slightly different scene, and chose to do these trees, not that that was not a struggle as well, LOL.

This is a little bit smaller than I usually work, and was done on an 8x10 Ampersand pastel board. Various pastels as usual.
Posted by Debbie Cusick at 6:18 PM
Email ThisBlogThis!Share to TwitterShare to FacebookShare to Pinterest
Labels: Florida