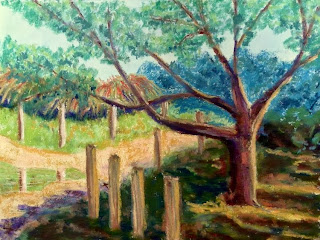 Today was the last day of our workshop with Michael Chesley Johnson. We had a glorious day today, and Ocean Hammock Park in St. Augustine Beach is a small gem - primarily a 1700-foot boardwalk walkway at present, but leading through varied habitats of the hammock and the dunes out to the beach. Again we did our color sketches in the morning to create a painting in the studio in the afternoon.

I took lots of photos along the boardwalk. But because I don't like being in direct sunlight I ended up sitting in the parking lot. I have Michael to thank for the idea of the finished painting above. I had done two color sketches during the morning. 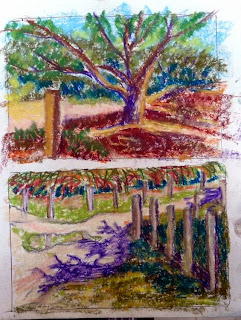 One was on the roadway, and one was of an interesting tree. He asked me which I planned to do for the full painting, and I said I wasn't sure as both had elements I liked. So Michael suggested I try to combine the two for a unified whole.

So I looked at them both. I had a unifying central element in the post - that sits on the left of the tree pic, and is the same as the rightmost post in the pathway pic. So I used that to center the two sides of my image, and had to crop off bits on either side to fit on my 9x12 Art Spectrum sheet.

But I did a pencil sketch first, and thought it looked good. So that was what I did. My reference photos were all on my cell phone, and the cell battery died at the end of the morning! So I had only my two color sketches, my memory, and my imagination as references for the finished work. :-)
Posted by Debbie Cusick at 8:38 PM
Email ThisBlogThis!Share to TwitterShare to FacebookShare to Pinterest
Labels: Florida