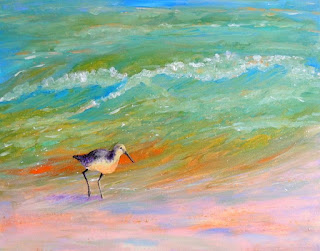 I had a little free time this morning and I decided I wanted to paint a *big*  painting this morning, big and bright and colorful. I found (can't even imagine where they came from!) several 16x20 heavyduty Canson cardboard sheets, all in dark colors - three dark brown and one black. How odd. But I figured I could cover the surface with pastel. WRONG. It turned out the paper mounted on the board was the standard bumpy (meaning ugly) side of Canson. When I tried to apply any pastel you got all the classic ugly Canson dimpling showing through, in DARK BROWN. I tried to blend to get rid of the dimples, and it did blend a bit, but the colors were still dark and muddy. Any layer I tried to put on still had the dimples, which I HATE. It just went from bad to worse and I finally decided it was not going to get any better and gave up. I loved this photo I had taken on a bird walk at Fort Matanzas a couple weeks ago, and the pastel was not doing it justice.

So I got out a 16x20 canvas I had, covered it with gesso toned with a little burnt siena and decided to try an acrylic. Never having taken any lessons in acrylic I still feel like I'm just futzing around with it, but even so I was happier with what I was getting than I was on the Canson board with pastel.

I've reached this logical stopping point with it right now, and tomorrow I have my monthly art critique so I'll be brave and bring it to that and see what advice I get on where to go next.

Meanwhile, here for fun, is what my Canson board with pastel on it looks like. Quite a sow's ear. I doubt there is a silk purse hiding in there anywhere. So are these boards good for anything? I can't even recall why I have them. I might still try this in pastel again though, on sanded paper! 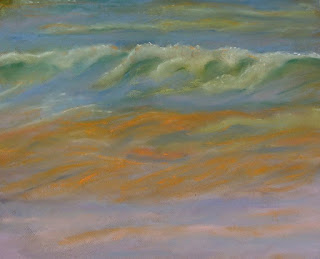