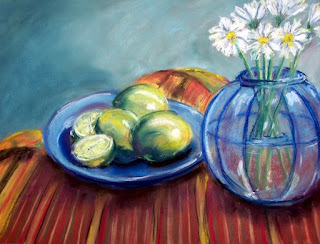 My Tuesday "Expressionism" art class was fun last night! We had several still lifes set up in the studio, and we chose one to work on (or chose one that had an easel stand open!) and we had exactly one timed hour for the still life. The idea was to work "fast and loose". We were told not to worry about getting shapes right, not to worry about details. Just to go for the "picture", to get the big shapes, the lights and the darks.

It was great! After an hour we got a little break, and then for the second hour did another pictures - either the same still life, or finding a place to move to at one of the other set-ups. I chose to move, but this is what I did in the first hour.
Posted by Debbie Cusick at 3:49 PM
Email ThisBlogThis!Share to TwitterShare to FacebookShare to Pinterest
Labels: Still life