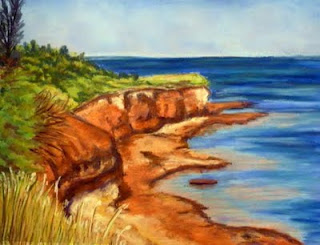 This is another of my Atlantic Canada series, this time on Prince Edward Island. The north part of the island, along the coastline near Cavendish, has lovely rugged cliffs and scenery, part of which is a national park. Much of the rest of the area near Cavendish is known as "Anne land" for the Island's most famous fictional resident, Anne of Green Gables. Maybe one of these days I'll have to do a painting of the Green Gables farmhouse itself, which was said to be the model for auther Lucy Maud Montgomery's fictional home of Anne's.
Posted by Debbie Cusick at 10:36 PM
Email ThisBlogThis!Share to TwitterShare to FacebookShare to Pinterest
Labels: Atlantic Canada