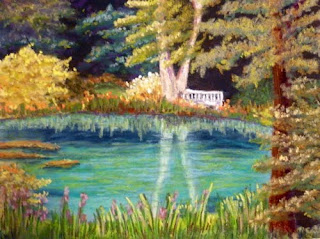 Last year I was in a show at the Bedminster Public Library. I missed the opening reception so went out with a friend on the following Saturday to look at the paintings. On the way home we took an alternate route, and ended up passing by the Leonard J. Buck Garden. Neither of us had ever even heard of it though we have lived in this area for years! So we decided to stop in. It was sort of a gray day, and we were the only visitors there, which gave it a secret and secluded air. The small pool in the central part of the garden seemed especially like a small and hidden retreat. I took some photos and had long thought of using one as a reference, and tonight suddenly seemed like the night.
I'll have a couple more pictures in a show at the same library next month. Perhaps I'll have to visit the garden again and see how it looks in autumn.
Posted by Debbie Cusick at 10:24 PM
Email ThisBlogThis!Share to TwitterShare to FacebookShare to Pinterest
Labels: New Jersey