Since the farm in Canada is one of my favorite inspirations I thought it would also be fun to show how painting it has changed over the years as I have worked on my art. When I think about my own entry into the fine art world, after many decades away from it, I think of it in 2 phases:
1) the abortive first attempt - which took place in 2002.
2) the second attempt - which took place in 2005, which totally captured me and drew me into pastels - a passion which continues to this day.
In 2002 I first signed up to take a beginning drawing class, feeling my drawing skills were very poor and rusty. We mostly drew in that class, and I enjoyed the practice. Our teacher did introduce us to pastels when we tried working with color. And I both enjoyed it and hated it. I liked it as I liked working with color, and I liked the immediacy of pastels. But I *hated* everything I attempted. They all looks childish and hopelessly amateurish. And of course they were. But I realize now, in retrospect, that a lot of my frustration was due to my total lack of understanding about how to use pastels - and this was not taught in the class.
In other words, I used them sort of like a child's crayons - laying a light color down on a piece of paper. I had not a clue about multiple layering, thick applications of color, scumbling, mixing and/or blending of colors. I colored so lightly there was nothing to blend anyway. :-)
I wanted to learn to draw and color well, and I wanted to do a painting of our farmhouse, and I just had no clue what I was doing or how to accomplish it. And the painting below is one I did of the farmhouse in that era - my first attempt. As you can tell it a very poor use of pastels. Only light single layers of colors, sketched on as if with a crayon or colored pencil. I hated it, so after that 2002 class I decided art was not for me and I gave up.
But I still had a yearning for art, and in 2005 I signed up for another beginning drawing class, with a different teacher. She also introduced us to pastels when we did some color work, but this time I got some feedback on the *real* use of pastels - laying in multiple layers of color, using the sides of the pastels to put down swaths of color, rather than just the timid use of a tip. Suddenly I had fallen madly in love with pastels! I have taken classes continually since them and work on painting every week. The work I was turning out, while still clearly "beginnerish", was far and away a different caliber from what I had done in my 2002 class, and I was no longer totally embarrassed and ashamed by my work. So in that environment I decided to do another painting of the farm, which I did en plein air when up at the farmhouse for summer vacation. Large storm clouds rolled in as I worked and luckily I was close to the house as I had to grab all my stuff and race to the kitchen to escape the rain! But I was far happier with the attempt and felt it actually looked like a real painting, unlike the 2002 attempt. 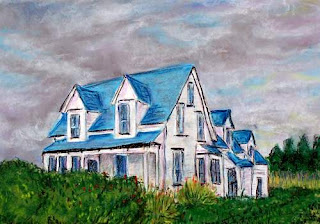 I liked it well enough that I found myself thinking that the farm was "done" - so no need to paint it again, except I still felt a yearning for it. So finally a couple years later I tried a different scene, the farmhouse in the early evening dusk. The perspective seems a little odd in this one though. The shed walls to the right seem to be marching uphill somehow, so it sort of spoils it for me, although I was happy with the sky, and the glow from the windows. 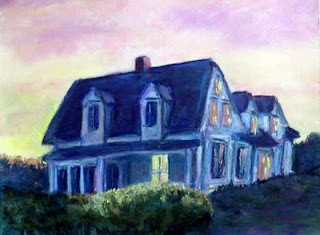 But the farm is never truly done I guess, so I just recently made another attempt, now six years since I have been pasteling in earnest. This one was inspired by the lovely light and colors of the autumn that I saw when I was up at the farmhouse for a week in October this past year. This one is truly my favorite farm painting now. Will I still be saying that in a few more years if I continue to turn out additional paintings? Who knows? 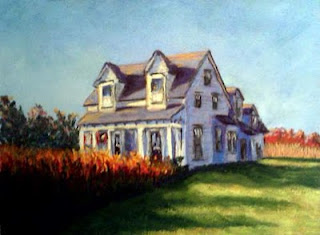 Hi Deb, Wow, I haven't seen your paintings in awhile and they are incredible. I love the tom turkeys and all the others but of course I'd say that ... I'm your sister..lol. We started drawing together and look how far you've progressed. I will miss you so much but know moving to Florida will open up more scenery, birds and wildlife to explore and paint...also your adorable grandson, John Henry and family. Love,"sister" Patty