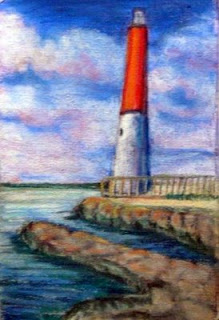 Well might as well post my other picture from my workshop today. For the last third of our workshop today Christina did a demo with a watercolor underpainting. She did it on a support she called "pastel canvas". Funny, pastel canvas is something I've never heard of before. But she had a book for us to look at called "Best of Pastels 2", with some gorgeous works in it, and at least 2 of them said they were done on pastel canvas.

Hmmm. anyway .... so she then gave us each a small piece to try, so we could do our own watercolor underpainting, and then pastel on top. Mine is from a photo of NJ's Barnegat Light. I've never done a watercolor underpainting before, and the canvas support was quite rough and did not take blending or layering very well, so it was interesting to work with. It did take *some* layers - but I could not achieve the smoothness I like, which I get with Canson. Though as I added more layers it got a bit better. I'm not sure this would be a support of choice though - but good to try new things, and the watercolor underpainting was rather fun.

This is also only about 6x9 inches, far smaller than my comfort zone. Christina also pointed out to me that I apparently was going for the 'leaning tower of Pisa" effect.

I didn't even see it until she pointed it out! I did my best to correct it, but there was not much that could be done with this support - so mostly I just had to accept it and move on. But this was a fun experiment
Posted by Debbie Cusick at 8:14 PM
Email ThisBlogThis!Share to TwitterShare to FacebookShare to Pinterest
Labels: lighthouse, New Jersey