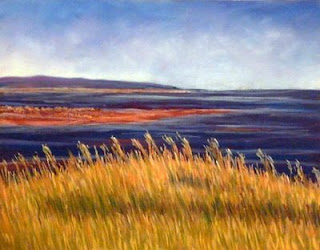 Well, I'm still up in the Maritimes(artistically speaking, at any rate). I finally got back to art class tonight and was able to show Christina my "homework" paintings I did last week in NC. She was mostly pleased with them though had a few small suggestions.

And tonight we worked on more landscapes. She had her own box of photos, but I had one more photo I'd brought to NC with me. It was (IMHO) the most boring of the few I had grabbed to take with me to NC, which is why it was still just sitting in my box. But I preferred working from my own photo reference rather than one of Christina's.

It was interesting too, as Christina told us some interesting horror stories (naming no names) during her years as President of the PSA, and judging the annual PSA show, where people sent in works that were clearly found to be copied from photos in famous magazines, like National Geographic and others - or more obscure magazines and then tried to claim that the works were their own and not copied, etc.

Clearly not something I'd be doing, but I still wanted to use my own ref, so used the "boring" photo. But as a painting I think it turned out more nicely than I had hoped, and nicer than the photo. I've told Christina about the Wetcanvas site, so she said to me, "Stop now, I think it's done. Now just go post it to Wetcanvas.

This is another old photo, also taken on PEI, but in this case I'm totally clueless about where I was when I took it.

Oh, done on a piece of 9x12 Colourfix, a dark terra cotta color. All my "homework" pieces were on 9x12 Colourfix, though various colors.
Also during class last night Christina gave us little small 3x6-inch samples of some fancy expensive pastel board (whose brand-name I promptly forgot!) and told us to just play with them to try the surface out. Now I'm not much of one for working too small, so not much I could think to do with a small 3x6, but I noodled around on it and created this orange.

When I am sitting looking at the fall colors reflected in the pond, I am wishing that I could draw or paint them. If you only needed will and no talent, I could be an artist like you Deb..

I love the PEI grasses picture. We used pastels in school art calsses occasionally, but I had no idea it was possible to do anything so delicate with them.