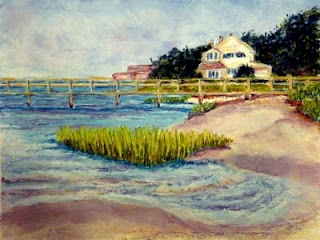 I'm still trying to work on water, so Christina said I could try a water picture in class tonight. I guess the more you do it the easier it gets or something, LOL. But true with many things. I had a lot of water reference photos, but decided to do this one. I took the photo down in Morehead City, NC where my dad lives. He has a lovely house facing Bogue Sound, and there is a nice little public beach just a couple blocks from his house. I took this photo at the public beach, and that was what I used for my reference tonight. This was hard work, and I took the entire class session on it.
But when I find myself thinking how hard it is, it's also nice to reflect on how far I have come since I took up pastels four years ago. In those early days I had no idea what I was doing. In May of 2005, only 2 months after I had first tried using pastels, I went down to visit my dad for a week. I decided to try to work on a couple pictures en plain aire while I was down there. And as it happened I chose this very same setting as one of my pictures to try.
So after I got home from class tonight I managed to track down the photo (and a poorly taken photo at that) of that original painting of this same scene and I'm actually giving a public airing down below! But this is one of the reasons I keep everything I've ever done. It's nice to step back in time to see where you came from sometimes on the days when you don't feel you are making any progress. :-) 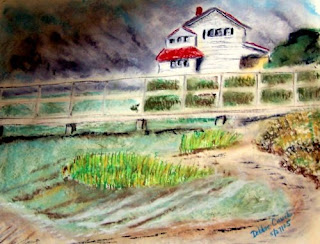 ANOTHER GREAT SITE TO LOOK AT IS