Wildflowers in the Shed 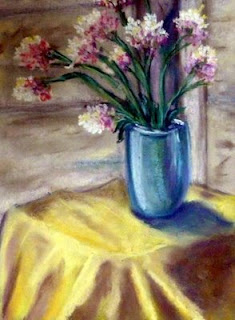 Here I am up in Canada for two weeks. I had visions of doing some fun plein air painting up here, but it's been rainy and overcast and cloudy every day so far. I could even cope with that, but the mosquitoes are *fierce*. You can barely step out the door without being badly bitten. Being outdoors is just no fun, so I've been uninspired about art work.

But yesteday I ran outside for a few minutes, long enough to pick a few boring wildflowers (but closest to house for minimum bug exposure) and set up a very impromptu still life on top of the microwave in the back shed. So this is from yesterday, about 45 minutes of work on a 9x12 sheet of Art Spectrum Colourfix.

At least my laptop is working! I took it apart this morning to get at the fan and heat sink, and cleaned out all the hair that was blocking the fan and apparently causing the laptop to badly overheat. Before the laptop would be heating up to 50 degrees C before it had been on for 30 minutes. Now I've had it on for over two hours and I'm still sittting at a nice comfy 37 degrees C. It's actually cool enough that I could sit in on my lap, rather than having it burn my lap.

With all my animal critters at home I guess I am Death on Fans. This is my third PC in a row to suffer fan problems. But at least I'm working now and can actually upload stuff, though over 26.4K dialup (how 20th century) it's taking me a while.
Posted by Debbie Cusick at 12:36 PM
Email ThisBlogThis!Share to TwitterShare to FacebookShare to Pinterest
Labels: Atlantic Canada